Unfortunately, Gunter Demnig’s timetable for the next months is already full - we cannot organise any more Stolperstein-laying ceremonies before September 2021.

Stolpersteine and the novel coronavirus (Covid-19)

Gunter Demnig is back on the road

On 18th June, Gunter Demnig started installing Stolpersteine in Germany again. If you are organizing or attending an installation, please pay attention to physical distancing regulations and keep away from both Gunter Demnig and others. If you have organized the installation but relatives cannot attend, please allow Gunter Demnig to place the stones and arrange for an inauguration ceremony later. The same is true if school students are unable to attend because of the pandemic.

At the moment, we expect Gunter Demnig to travel outside of Germany later this summer and continue his installations in Central Europe. However, we are monitoring the development of the virus and it could be that there are last-minute cancellations.

It took us a while to figure out how to react to this unprecedented global health situation. Initially, Gunter Demnig decided that he would continue to place Stolpersteine until the end of March in Germany and cancelled his tours of the Netherlands, Spain and France.

Now, ALL of Gunter Demnig’s installations have been cancelled at least until 15th June 2020. We don’t want either Gunter Demnig who is high-risk on account of his age or anybody else to risk contracting the virus while he travels and meets different people in various towns. Also, at the moment he would not be able to stay in hotels as he usually does. We hope that you will understand.

We will continue to follow advice from the World Health Organisation and local health authorities and will inform you of any changes.

What to do in case of a cancellation

If you are the organiser of an installation that has been cancelled, we will send you the Stolpersteine that you have “ordered” and you will be able to decide yourselves whether to place them without Gunter Demnig on the original planned date or at a later point in time.

If you are an organiser, you can also decide whether to send the Stolpersteine to relatives, many of whom can also not travel because of the current restrictions.

Since many people will not be able to attend the planned installations, it might make sense to postpone the appointment.

Unfortunately, Gunter Demnig will NOT be able to come to place Stolpersteine himself at a later date, as his timetable is full until mid-2021. Therefore, please – exceptionally – arrange to have them placed without him – either by the local authorities or a local building company.

Usually Gunter Demnig is the first person to place Stolpersteine in a new place. This year, there will be exceptions to this rule because of the COVID-19 pandemic and its consequences. However, these will remain exceptions and as soon as the situation has subsided and Gunter Demnig can travel again he will once again be the first to install Stolpersteine in new places.

Please ensure that the address you provide is available at all times. We do not decide when UPS delivers the Stolpersteine and cannot influence this. Please, therefore, give a home address rather than that of an institution if you are worried that this might not be open because of the circumstances. Our sculptor Michael Friedrichs-Friedlaender will call you when he has sent the Stolpersteine and will give you the UPS tracking details.

Invoices, as usual, will be sent AFTER the Stolpersteine have been dispatched.

We would appreciate it if you could cancel any hotel reservations that you kindly made. Thank you!

Also, please send pictures of any installations that do go ahead to Katja Demnig (info(at)stolpersteine.eu) for our records.

We thank you for your patience and understanding. We hope that this situation will soon be a bad memory and Gunter Demnig will be back on the road. We are with you all in spirit.

With best wishes from Gunter Demnig and his team

10% surcharge on Stolpersteine outside of Germany from January 2020

From January 2020, we will be introducing a surcharge on all Stolpersteine placed outside of Germany. The price will thus increase from 120 to 132 euros. It was not an easy decision as we have tried to maintain the price over the years, but rising material and petrol costs have forced us to reconsider.

As you know, the price of a Stolperstein not only comprises material and production costs but also covers travel, accommodation, research, educational work and the development of a comprehensive database on top of overheads. The idea is for the project to be long-term and sustainable over generations.

When the Foundation board members last met in summer 2019, it was clear that the project’s future could be jeopardized if certain measures were not taken.

We thank you for your understanding.

Unfortunately, Gunter Demnig’s timetable for the next months is already full - we cannot organise any more Stolperstein-laying ceremonies before 2021.

Our waiting list is getting longer and longer and we appreciate your patience and understanding.

The Stolpersteine began in 1996 as a symbolic art project. It has since grown and some 75,000 Stolpersteine have now been placed across Europe.

However, Demnig has always been aware that it will never be possible to lay Stolpersteine for the millions of victims of the Nazis - thus his project remains symbolic.

Each Stolperstein is made and laid by hand. Michael Friedrichs-Friedländer makes and embosses some 440 Stolpersteine a month - Gunter Demnig travels across Germany and Europe and lays them.

In certain cases and only when Gunter has already placed the first Stolpersteine in a village, town or city, it is possible to “order” Stolpersteine and have them placed by the local authorities. Such placements are called Community Installations (CIs).

The manufacture of the Stolpersteine remains in the hands of the Gunter Demnig’s team, which has made a conscious decision to not expand production - in direct opposition to the mass murder that the Nazis engaged in between 1933 and 1945.

Although the project will remain symbolic it is also long-term - Stolpersteine will continue to be made and laid over the next years and decades.

We thank you for your patience, support and involvement and look forward to hearing from you.

Two Stolpersteine, which commemorate the German artists Charlotte Salomon and Felix Nussbaum, have joined the collection at Yad Vashem’s Museum of Holocaust Art.

Charlotte Salomon, who was born in Berlin in 1917, is primarily remembered for the autobiographical series of paintings Leben? oder Theater?: Ein Singspiel, which she created between 1941 and 1943 in the south of France where she had taken refuge from the Nazis. She and her husband were arrested in October 1943 and deported to Auschwitz. Salomon and her unborn child were murdered soon after arrival. Her husband died three months later.

The surrealist painter Felix Nussbaum was born in Osnabrueck in 1904. He moved to Belgium with his companion and later wife Felka Platek in 1935. In May 1940, Nussbaum was arrested as an enemy alien by the Belgian police. He was sent to the camps of Saint Cyprien and Gurs in southern France. After asking to be transferred back to Germany, he was able to escape from the train and find his way back to Belgium where he was reunited with Felka. They lived in hiding until 1944 when they were caught and sent to Auschwitz. The exact circumstances of their death are not clear.

The Museum of Holocaust Art is situated in Yad Vashem’s Square of Hope. The rotating exhibition displays some 120 works, most of which were created either during the Holocaust itself or before by artists who were then murdered. Four artists are particularly highlighted: Bruno Schulz, Carol Deutsch, Charlotte Salomon and Felix Nussbaum.

There are already Stolpersteine in the ground for Charlotte Salomon and Felix Nussbaum in Berlin and Osnabrueck.

Gunter Demnig will place the first REMEMBRANCE STONES in Spain, as well as several STOLPERSTEINE in Mallorca and Menorca in December 2018.

First Stolperschwelle outside of Europe

On 30th October, 2017 we installed the first STOLPERSCHWELLE outside of Europe. It was placed in front of the Pestallozzi school in Buenos Aires to commemorate children who were forced to flee Europe between 1933 and 1945. It was the idea of a former student of the school, who had STOLPERSTEINE placed for her relatives in Konstanz years ago.
We were delighted when the school and the German embassy turned to us earlier this year to see whether such an installation would be possible. Anna Warda flew to Argentina to represent Gunter Demnig. The installation was very well attended, including by many of those forced to flee. They spoke of their experiences and those of their families.
Anna Warda held a lecture about the STOLPERSTEINE and commemorative art. During her stay in Buenos Aires, she also met some of the members of “barrios x memoria y justicia”, an association which makes ceramic tiles that pay tribute to the victims of the military dictatorship in Argentina.
Thus, another bridge of “non-forgetting” was created between Germany and Latin America.

The inscription of the STOLPERSCHWELLE reads:

IN HONOUR OF THE TEACHERS AND THE CHILDREN OF THE IMMIGRANT FAMILIES FORCED TO LEAVE GERMANY, WHO AFTER 1934 FOUND FOUND FREEDOM, SHELTER AND A PATH BACK TO LIFE AT THE PESTALOZZI SCHOOL FROM

Anne Thomas held a presentation about STOLPERSTEINE at the University of Kentucky's Historic Preservation Symposium. Click here to watch the video on youtube.

The Art and Museum Library of the City of Cologne (KMB) has been trying to create a comprehensive documentation archive focussed on Gunter Demnig and his STOLPERSTEINE project, which includes publications, articles, flyers, brochures, posters, photos, DVDs etc. The idea is that the archive should be accessible to the public without restrictions, so long as there is no breach of data protection laws. The KMB thus hopes to create a central public space to promote further research about the STOLPERSTEINE project and would appreciate any appropriate material being sent to the following address:

Please circulate this appeal as you feel necessary

Dear Friends of the STOLPERSTEINE

Since January 2015, the STOLPERSTEINE/STOLPERSCHWELLE project has been under the auspices of the foundation STIFTUNG – SPUREN – Gunter Demnig.

The goals remain as before, as do the costs (1 STOLPERSTEIN costs 120 euros).

I look forward to continuing to work with you.

Moreover, 2015 is filling up rapidly.

Our waiting list is getting longer and longer and we appreciate your patience and understanding.

The Stolpersteine began in 1996 as a symbolic art project. It has since grown and some 45,000 Stolpersteine have now been placed across Europe.

However, Demnig has always been aware that it will never be possible to lay Stolpersteine for the millions of victims of the Nazis - thus his project remains symbolic.

Each Stolperstein is made and laid by hand. Michael Friedrichs-Friedländer makes and embosses some 450 Stolpersteine a month - Gunter Demnig travels across Germany and Europe and lays them.

The Stolperstein team has made a conscious decision to not expand production - in direct opposition to the mass murder that the Nazis engaged in between 1933 and 1945.

However, although the project will remain symbolic it is also long-term - Stolpersteine will continue to be made and laid over the next years and decades.

We thank you for your support and involvement and look forward to hearing from you.

16th of november 2013: STOLPERSTEINE is awarded the Lothar-Kreyssig-Friedenspreis in Magdeburg

25.11.2012: STOLPERSTEINE is awarded the Erich-Kästner-Preis in Dresden

New York
Gunter Demnig will be awarded the Dr. Bernhard Heller Prize at Temple Emanu-El (One East 65th Street NY) on 3rd May.

Stuttgart
The STUTTGARTER STOLPERSTEINE film is being screened on 15th April and will be followed by a Q&A. 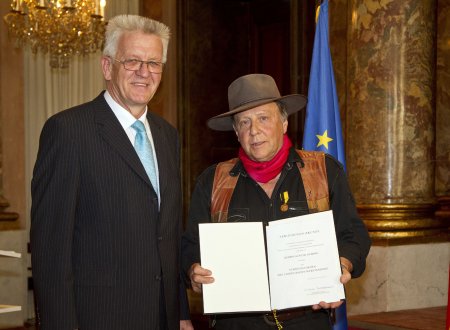 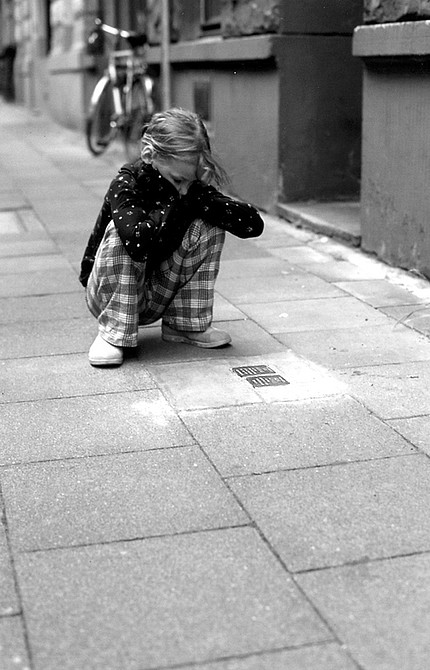 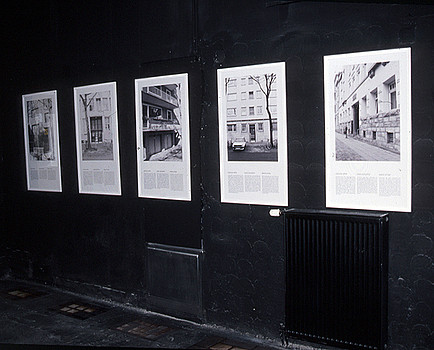 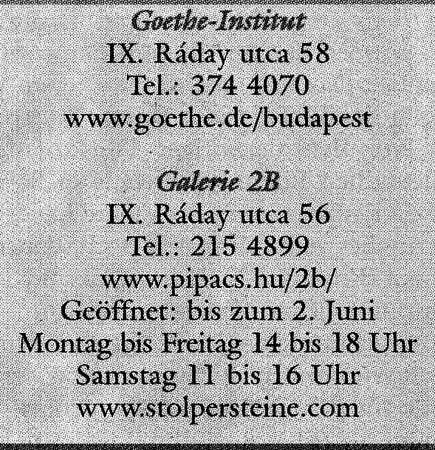 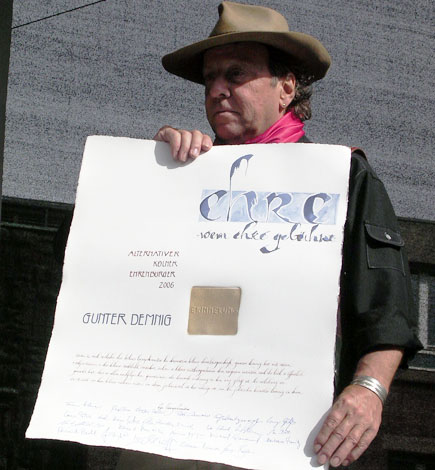 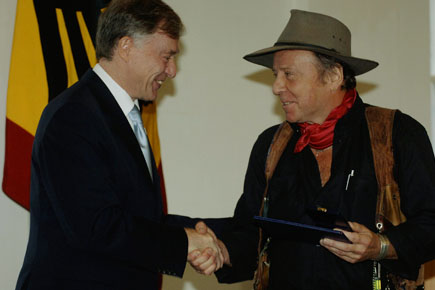